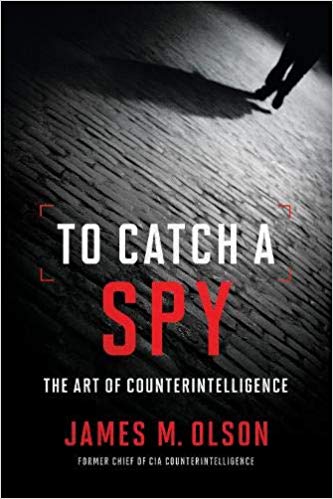 Book Release- April 2019 To Catch a Spy: The Art of Counterintelligence by James Olson

The United States is losing the counterintelligence war. Foreign intelligence services, particularly those of China, Russia, and Cuba, are recruiting spies in our midst and stealing our secrets and cutting-edge technologies. In To Catch a Spy: The Art of Counterintelligence, James M.

When it comes to the author, Jim Olson….It’s always top secret and action packed.

Imagine living a lie for 31 years. That’s what James Olson and his wife Meredith did while spying for the CIA. Spying for his country was the furthest thing from his mind when Olson, a farm boy from Iowa, received a mysterious phone call that changed his life forever. In his presentation, Olson takes you inside the real world of being a CIA spy. He describes the rigorous training they receive and the difficult dilemmas that they face in the field on a daily basis. Olson explains how the global war on terror affects everyone and that the country needs to know that the United States will be hit again within its borders. The United States needs spies to protect the country and its vital interests.

To schedule Jim Olson to speak at your next conference, contact Midwest Speakers Bureau today at 877-974-6972 or angela@speakernow.com.