Being Worth Following Is More Important Than Talent by Don Yaeger 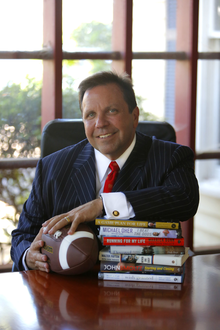 Don Yaeger’s interview with Roger Staubach  at the 2018 Pro Football Hall of Fame in Canton, Ohio.

Maybe the best parts of life as a journalist are those moments when you get to go eye-to-eye with one of your heroes and your “job” is to engage them in conversation.  And if you get to do that “job” at the Pro Football Hall of Fame in Canton, Ohio the “work” gets even sweeter.

A couple of weeks ago, leadership legend John Maxwell invited me to join him on stage in Canton to interview football legend, Roger Staubach.  We talked about how he went from a kid in Cincinnati, Ohio to a Heisman-trophy winning, two-time Super Bowl winning, Hall-of-Fame quarterback with the Dallas Cowboys.  I loved the entire conversation, but he told one story that really grabbed my attention.

Coming into his senior year of high school, Staubach’s coach wanted him to step up and take the job as the team’s quarterback.  He actually told his coach, “I don’t want to be quarterback and you’ve already got a great quarterback,” naming off a kid who was bigger, stronger than him.  The coach looked at him and said, “Yeah, he may be bigger, stronger, he may have been a quarterback before.  But the other boys will follow you.”

Roger Staubach will forever be enshrined in Canton, and yet he didn’t see himself as quarterback.  He didn’t see a gift that had little to do with arm strength or accuracy.  He told me, “If I didn’t listen to that coach, if I had just said, ‘No, coach, the other guy is the guy,’ first off, I’m not sitting on the stage with you.  My bust is not in the Hall of Fame.  It was because of what the coach saw in me – that people will follow me – that all this has happened.”

We should all be that person others will follow, whether at home, at work, or on a football field.

But first, we have to be a person they’ll want to follow.  What does that look like?  For Staubach, he said it was a combination of his knowledge of the game, his individual skills and that he never stopped working on his personal leadership development.

Are you someone worth following?  What about you would make you that person everybody should want to follow?  What is it you could work on that makes sure that it stays that way?  As we work to develop our strengths, become bigger, stronger, faster, smarter, more accomplished, we can’t forget to develop the ability to become worth following.

Many people think leadership is just a natural skill but it’s developed.  Roger Staubach went to work on becoming more likable, humble, and keeping his integrity through it all.  He had these characteristics that made people willing to follow him.  What ultimately made him a Hall of Famer was that he became impossible not to follow.  He actually walked his talk.

How many leaders do we know who say all the right things, but when you look at the rest of their life it’s a disaster?  People talk about being honest and ethical, and then their personal life is clearly not honest and ethical.  Eventually, someone not worth following is found out and the façade around them crumbles.

So, how do you become a person who is worth following?  Roger Staubach’s life shows us what to do:

Humility – Would you become someone different once success comes your way?  Can you maintain humility, even as things are going extraordinarily well for you?  Greatness works for the goal and not for praise because the goal is more important than ego.  True greatness gains recognition because it has been observed by others, because someone worth following readily accepts blame, and acknowledges responsibility and ownership of a situation.  It requires action and dedication, not simply patting yourself on the back.  He shared credit with the team, which made others willing to do more to make him successful.

Integrity – Everyone on the team knew that if Roger said he was going to do something, they could count on it.  Can you maintain integrity?  Great leaders are comfortable in front of the mirror and they live their lives with integrity.  They incorporate their values in every aspect of their lives, from the playing field to the home—not because the eyes of the world are upon them, but because it is the right thing to do.

Likability – If people like you, they will follow you more readily.  My friend John Maxwell says, “If you are respected and not liked, then your influence will be limited and short-lived.  People will not fully trust you and will only follow you at a distance.  In fact, they will circle around like vultures, waiting for you to fail.  Your team will also have a high rate of turnover because no one enjoys working for an unlikeable leader.  Eventually, you will burn out since no one is close enough for you to be able to share their care.”  You don’t have to be best friends, but you do have to be conscious of how you interact with others.

Our goal should be to become worth following.

Your peers might be bigger and stronger than you, and they may have more experience than you, but do others follow you?  If the answer is yes, you have a Great leg up on your competition.