“Recognized authority on how organizations and professionals create distinction in the marketplace and deliver an Ultimate Customer Experience. Inducted into the Sales & Marketing Hall of Fame in 2016.”

Why would a customer or prospect choose you INSTEAD OF your competition? How do you differentiate your sales and customer service efforts in a hyper-competitive marketplace?

Scott McKain is an internationally known expert who helps organizations create distinction in every phase of business and teaches how to deliver an “Ultimate Customer Experience®.”

Scott McKain creates captivating presentations and bestselling books which clearly reveal how to create more compelling connections between you and your customers and how to stand out and move up, regardless of the economic climate in your industry.

Scott McKain’s calling is business – and his passion is platform presentations. He is a unique combination of vast speaking experience and new, cutting-edge information. His presentations benefit from vast professional experience, combined with his innate talent for articulating successful ideas. McKain has spoken before and consulted for the world’s most influential corporations.

Social Media in Action.
In today’s Facebook/Twitter/social media world, a dissatisfied customer now has a platform to broadcast his or her opinions regarding your organization to the world instantaneously. In this environment, it’s never been more important to understand and execute the steps necessary to create the “ultimate customer experience.” McKain is one of about 150 living members of the Professional Speakers Hall of Fame. He was also recently recognized by Social Media Marketing Magazine as one of the fifty most influential marketing authors on Twitter and GenJuice, a leading resource for emerging professionals, as one of the “Top 25” people for Gen Y and Millennial leaders to follow on Twitter.

Creating Differentiation.
There are a myriad of choices in the marketplace for prospects and customers seeking the products and services of your industry. So, how does your organization – and the professionals who work with you – stand out from the plethora of competitors?

In his book, Create Distinction, (expanded and revised release of bestselling book, “Collapse of Distinction” – named by thirty major newspapers as one of the “Ten Best Business Books” of the year and reached the number one spot on Amazon.com’s list of business bestsellers), McKain takes a revolutionary approach by showing how organizations and individual professionals create differentiation in the marketplace.

McKain has appeared multiple times as a commentator on FOX News to discuss business, politics, and American culture. In his earlier career as a broadcast journalist, two million people saw his commentaries each week on 80 television stations in the United States, Canada, and Australia. He has also been a news anchor for a CBS-TV affiliate in one of the nation’s 25 largest markets.

McKain has been named as a “Hoosier Hero” in his home state because of his commitment to youth and philanthropy. He was selected by Arnold Schwarzenegger to be the emcee and speaker for the Great American Workout, held on the White House lawn with the President in the audience carried live on CNN and NBC’s “Today” show. He also portrayed the villain in a film by internationally esteemed director Werner Herzog, acclaimed by critic Roger Ebert as one of the “best movies” ever made. 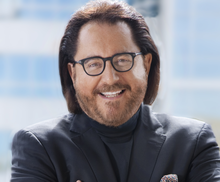