Scott Klososky, a former CEO of three successful startup companies, has no fear about shaking up the status quo around the way we build teams and set powerful directions. His programs are known for delivering fresh observations, ideas, and practical steps that organizations can use to restructure groups, create effective strategy, and apply technology that’s full of impact. His keynotes are riveting and his workshops instill new concepts that can be applied immediately to maximize results.

Scott hit the ground running fresh out of high school, where his job as a delivery boy was a spring board into the world of technology. He became division head of computer sales, and then purchased that division as his own company. It was eventually built into a twelve store operation in three states.

His next endeavor was as Founder and CEO of Paragraph, Inc., a Soviet/American joint venture founded in 1988, despite international tensions. Half of the company was sold to Silicon Graphics and the other half is still expanding today (Parascript, Inc.). Scott then collaborated with H.R. Haldeman to publish his diaries of his years as an aide to President Nixon, which was a bestseller (Putnam Publishing) and involving Sony Interactive in the release of a companion CD-ROM.

The evolving internet ushered in a world of opportunity for inspiring pioneers, and Scott was not left behind. He was Founder and CEO of webcasts.com, an early producer of webcasted media ranging from corporate and government communications, to sporting events and entertainment. His expertise in leadership and his creative approach to business direction, inspired Critical Technologies to hire him as a turnaround CEO, where he completely rebuilt the underlying products and brought the company to profitability. Today, Scott shares his unique perspectives on technology, business culture, and the future, with audiences and organizations all over the globe. 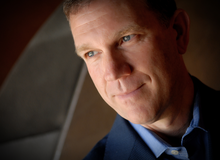