Each of the twelve predictions is based on a real trend or technology currently under development, although I advise you against giving the precise timing of each prediction too much credence.

Your Existing Car Will Soon Be a Self-Driving Car. In January, Ghost Locomotion, a California start-up, came out of stealth mode to announce it developed a kit that can convert an existing automobile into a self-driving car for only $7,000. Initially, the technology will only allow consumers to drive in autonomous mode on highways but, as the technology improves and the regulators grow more comfortable with its effectiveness, company officials expect retro-fitted automobiles to be capable of navigating city streets by 2024. Executives at Luminar, a manufacturer of LIDAR technology, believe its technology will beat Ghost in the commercial marketplace because it works better in the dark and is expected to cost only $500.

Self-Sufficient Greenhouses Fuel Urban Agriculture Growth. In February, an innovative manufacturer of organic solar cells–using technology developed by North Carolina State University–created a flexible and semi-transparent solar cell which can be tuned to absorb specific wavelengths of light. The first market for its technology are urban farmers who are excited by the possibility of using sunlight to both grow plants and heat the greenhouse. By alleviating these major costs, the technology is expected to radically transform food production and distribution in the coming years as the number of urban greenhouses explodes.

Paying Passengers Herald a New, Cleaner Electric Aviation Age. In March, Harbour Air, a small Canadian airliner specializing in flying passenger’s between Vancouver and Whistler, British Columbia, announced plans to begin shepherding paying customers with the first of its electric airplanes. In addition to eliminating massive amounts of CO2 emission, the move will dramatically lower fuel and maintenance costs. The company expects to electrify its entire fleet by 2025 and be capable of ferrying 750,000 passengers a year.

The Latest C-Suite Executives: Teenagers. GoodEnergy, a UK-based clean energy company, sparked an unexpected development in boardrooms across the globe. As of April of 2021, ten other companies had followed GoodEnergy’s lead and appointed a teenager to its board of directors. “This isn’t a PR stunt,” said one board chair. “Many of us live in a bubble and if we want to be good stewards for future generations their voices need to be represented.”

Major Retailers Adopt Zero-Waste Packaging. Driven by the strong environmental ethos and the growing purchasing power of Generation Z, a number of leading retailers, including Amazon, Walmart, and Target, committed to achieving zero-waste packaging by 2030. The retailers were initially reluctant to adopt the aggressive goal because they believed that most consumers wouldn’t want to cart reusable packages back to the store but, by late spring, they realized that the extraordinary rise of e-commerce combined with a plethora of delivery options had freed a majority of consumers of this burden.

Coming Soon to a 3D Printer Near You: Living Skin. Researchers at Rensselaer Polytechnic Institute announced in June that its 3D-printed living skin received approval from the FDA. What makes the skin different from past 3D printed versions is that it contains blood vessels which allow the skin to integrate with patients’ host cells. This ensures the skin stays on the body long enough to accelerate wound healing. The initial users of the product are expected to be burn victims and patients with diabetic and pressure ulcers.

Lancaster Commits to Becoming First “Landfill-Free” City in America. In July, spurred on by the promising results of its “greener-than-green” trash-to-hydrogen production plant, the city of Lancaster, California committed to disposing of all of the city’s paper, old tires, textiles, and plastic by burning it at high temperatures and converting it to hydrogen. The city’s demonstration plant is already being scaled up and city officials hope to reach a rate of 50 percent disposal by the end of 2021 and 100 percent by 2023.

Innovative Product Drives Plastic Straws Out of Stores–and the Ocean. Aided by the extraordinary effectiveness, growth, and popularity of Sulapac Oy’s biodegradable straws, major food retailers, including Starbucks, McDonalds, and KFC announced in August that they voluntarily agreed to remove all plastic straws from their stores in an effort to help protect the world’s oceans. Leading environmentalists are still cautioning that micro-plastic contaminants remain a global health threat and have vowed to continue to seek bans on other plastic products, including plastic water and soda bottles, grocery bags, and cosmetic packaging.

CO2-Free Cement is Here. CO2-Free Steel is Next. Heliogen, a leading solar energy company, announced in September that its proprietary algorithms can now shift a field of solar mirrors to create temperatures in excess of 1000 degrees Celsius. This will allow cement manufacturers to begin making their product without fossil fuels. Within the next year, the company expects to also use solar power to manufacture steel. This is a significant development because the cement and steel industries, combined, are responsible for approximately 20 percent of the world’s carbon dioxide (CO2) emissions. In the statement announcing the news, the CEO added, “The fact that sunlight is free and produces no CO2 makes this a no-brainer. We expect to scale incredibly fast.”

Welding Breakthrough Sparks Manufacturing Innovation Boom. Welding can seem like a boring 20th century process but in October researchers in Israel created an ultrafast laser system that allows glass and metal to be welded together. The development is expected to create a number of exciting new applications in the aerospace, defense, and healthcare sectors, including all-glass fuselages, innovative antennas that can deliver high speed internet service to remote and rural areas, and biocompatible medical devices capable of staying in the body for long periods of time.

The Million Mile Battery is Here. Utilizing a new cathode material made from a combination of nickel, cobalt, and manganese, a stealth start-up funded by Elon Musk announced in November that it created a battery capable of lasting more than a million miles. The battery also has a range of 300 miles making it viable for use in robot taxis and long-haul electric trucks.

The Future Will Be Created Out of Thin Air. Mimicking Mother Nature’s ability to pull carbon out of the air (similar to how trees grow), a handful of innovative start-ups had, by year’s end, perfected direct air capture (DAC) technology well enough to begin manufacturing real products. By harnessing industrial photosynthesis–and thus sourcing carbon from thin air rather than the ground–these companies hope to manufacture fuels, plastics, and concrete in the coming years.

About Jack Uldrich: Jack is highly regarded as a keynote speaker. His authoritative speeches on future trends, emerging technologies, innovation, change management and leadership are filled with knowledge, insight and creativity. Jack provides provocative new perspectives on competitive advantage, change management and transformational leadership. He brings to light the advantages of being creative and using the powers of individual imagination. 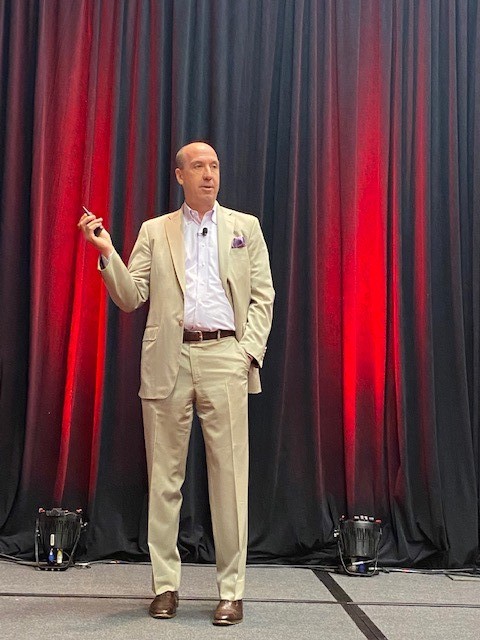